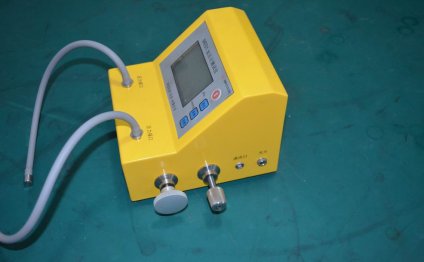 ECRI received from member hospitals two reports of fatal cerebral air embolism immediately following routine recalibration of an invasive arterial blood pressure monitoring system. In both cases, the equipment was calibrated by pressurizing the system with air using a sphygmomanometer cuff inflation bulb and comparing the pressure monitor display with the pressure indicated by a mercury manometer. Apparently, a bolus of air was infused into the patient, either because the stopcock between the catheter and pressure tubing had not been closed or because air had been inadvertently introduced into the transducer dome or continuous flushing device, then fast-flushed into the patient's artery after calibration.

Blood pressure transducers and electronic amplifiers have had a history of calibration problems; therefore, many users have instituted procedures for checking system calibration to ensure that blood pressures are measured accurately. The monitoring system is usually calibrated during periodic inspections and immediately before connection to the patient. This well-known technique compares the electronic pressure display to the pressure indicated on a mercury manometer (after zeroing the transducer) and is relatively simple to perform with inexpensive equipment. However, in some hospitals, this same method is also used to recalibrate the system while it is connected to the patient at eight-hour intervals (work-shift changes) and after suspicious or clinically significant readings. Using this technique, the clinician must turn off the stopcock between the transducer and patient to pressurize the system with the cuff inflation bulb.

Most clinicians recognize that air embolism is possible if this step is omitted. However, it can be overlooked. When it is, air pressure greater than the blood pressure will force air into the transducer dome and tubing system and, possibly, into the patient. Under these conditions, the calibration pressure (typically 100 or 200 mm Hg) will not be reached, and the clinician may try additional squeezes of the inflation bulb, further increasing the likelihood of air embolism. Air can also be introduced into the system or patient if the patient stopcock is opened before the air pressure is released.

Another potential mechanism for air embolus formation is fast-flushing of the system when air is present, using continuous flush valves. Depending on its duration, flushing can cause significant retrograde flow in the arterial vessels because the flush pressures are typically greater than the arterial pressures. Even small amounts of air, inadvertently introduced into the system, can be flushed from the radial artery, up the brachial artery and aorta to the cerebral and coronary blood supply, where they can cause an air embolus. (For example, a small amount of air can be introduced into the system, even with the patient stopcock closed during calibration, if the calibration pressure exceeds that of the pressure infuser flushing system. Air might also be inadvertently introduced after blood sampling.)

In general, the benefits of continuous flush valves to maintain an open catheter lumen outweigh the risks of retrograde flow during fast-flushing. The likelihood of significant retrograde flow can be reduced by minimizing the time that the fast-flush valve is activated. (This is especially relevant when the system's fidelity is checked by observing the dynamic response to a step function generated by quick-releasing the fast-flush mechanism.) In any event, it is imperative to keep the system free of air at all times.