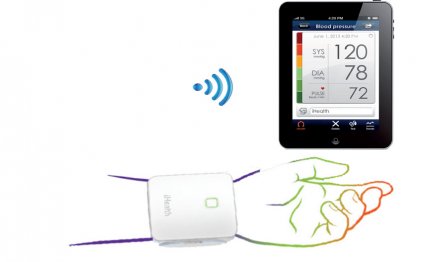 SAN FRANCISCO – Sept. 3, 2014 – Qardio, the company behind the wireless blood pressure monitor QardioArm and the wearable ECG monitor QardioCore, today announces the release of its app for Android. The Qardio App for iOS and Android connects with the QardioArm wearable monitor to accurately record blood pressure readings and sync information to the Qardio cloud. 67 million American adults have high blood pressure, and fewer than half of them have their condition under control. The most effective therapy prescribed by the most careful clinician will control hypertension only if patients are motivated. Unfortunately, with traditional blood pressure devices, studies show only few people monitor themselves as often as they should. The QardioArm blood pressure monitor offers a simpler and more engaging way for people to monitor their health by leveraging breakthrough design and technologies, combined with the power of smartphones and tablets. QardioArm is compact and does not even look like a medical device, so users can confidently monitor their blood pressure any time, any place. Since QardioArm launched with the iOS version of the app in early 2014, thousands of users have found a convenient way to measure blood pressure regularly, and make those readings available to the people that can make the best use of them. With this new release of the Qardio app, Qardio brings the powerful features and delightful user experience of QardioArm to the Android platform. “Our ultimate goal is to provide users with a convenient, simple way to monitor their heart health that fits their daily lives, ” said Rosario Iannella, CTO and co-founder of Qardio. “Adding the Android platform to our app offering now allows even more people to track their heart health easily.” QardioArm is available online and in selected stores in the US for $99 (RRP), and in more than thirty other countries. The Qardio App for Android The Qardio App for iOS